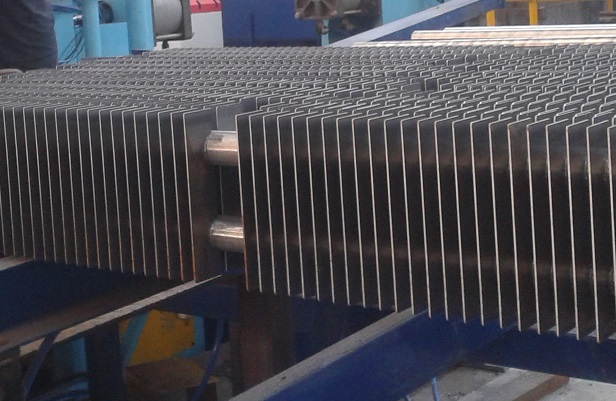 An I-type segmented finned tube is disclosed having a fin composed of an elongated flat strip of metal, the upper portion of which forms the major fin portion having a plurality of segmented fins formed thereon and extending radially outward therefrom. The lower portion of the flat strip forms the base which serves as a contact area for a welding electrode. The method of bonding the segmented fin to the tube is accomplished by an ultra-high frequency welding process which melts the root portion of the fin and the registering surface of the tube just prior to their mutual engagement. A force is then applied to the tips of the fins at the point of mutual engagement to forge the molten root portion of the fin to the molten surface of the tube to create a fused bond therebetween.

Finned tube heat exchangers are used in a wide variety of applications for transferring heat from one source to another. For example, a plurality of tubes may be arranged within a casing in a parallel configuration for extracting heat from the hot exhaust gases of turbines. In this application water is normally circulated in the tubes while the hot exhaust gases are circulated over the external surface of the tubes. The hot water or steam generated is generally used for process plant requirements. Such exhaust heat recovery systerns almost invariably dictate the use of extended heat transfer surfaces.

Finned tube heat exchangers are also extensively used in power generation, such as boilers and economizers. In some such applications it is desirable to make the finsthicker in order to have the finned tubes positioned closer to the radiant section of the exchanger.

The conventional tubing having extended heat transfer surfaces in finned tubing is manufactured in a variety of configurations. Various type fins include: (1) a flanged fin type in which a major fin portion has a bottom flanged base oriented perpendicular thereto; (2) a channel fin type in which a continuous base has a pair of fin portions extending radially upward therefrom in a U-shaped configuration; and (3) an I-type fin in which a flat fin portion has its lower edge forming the base for connection to the tube.

Each of these various fins can be of the continuous or segmented type. Continuous fins normally have a smooth continuous surface, although they could also be perforated to meet certain design conditions. The segmented fins are either oriented parallel to the root portion of the fin or are twisted at an angle thereto in any .desired orientation in order to promote turbulence and spaces between adjacent fins on the same tube, as well as a reduction in the laminar film of fluid in contact with the fin. It should also be noted that certain segmented fins have more surface area than a continuous fin of the same height and thickness. Such fins are described in a co-pending US. Pat. application, Ser. No. 765,165 entitled Segmented Pinned Tubes For Use In Heat Exchangers, now abandoned.

Although most of the above-mentioned finned tubing is commercially available, the Hype segmented finned tubing has not been used extensively because of various mechanical difficulties encountered in the manufacturing thereof.

As stated above, I-type segmented fins have heretofore been bonded to tubing by either a brazing or a welding process.

Various shortcomings are encountered in utilizing a brazing process. Because of the mechanical characteristics of a brazed bond most users prefer a welded bond for high temperature applications. Moreover, the brazing process used in the production of I-type segmented finned tubing is very time consuming and expensive.

I-type slotted finned tubing has also been produced by standard are or fillet welding processes. Such processes also suffer from serious shortcomings in that such processes also operate at a very slow rate which makes the cost of such production methods quite high. Slotted or perforated fintube configurations have the added disadvantage of removing metal, i.e., heat transfer surface, from the heat exchanger which is an obvious economic disadvantage.

As a result, the widespread use of l-type segmented finned tubing has been severely restricted by shortcomings encountered in the production thereof.

The present invention obviates the above-mentioned shortcomings by providing an I-type segmented finned tubing that is capable of being produced rapidly and economically.

The Hype segmented finned tubing includes a fin composed of an elongated flat strip of metal. The upper portion of the flat strip forms the major portion having a plurality of segmented fins formed thereon and extending radially outward therefrom. The lower portion of the flat strip forms the base which serves as a contact area for a welding electrode. The fin is helically wound or longitudinally formed on the tube with the base of the fin being bonded thereto.

The method of bonding the segmented fin to the tube is accomplished by means of a high frequency welding process. The method of manufacture includes feeding the segmented fin onto a tube in a helical or longitudi- I nal configuration. The welding appparatus then provides a first electrode to engage the contact area of the fin just prior to the point of mutual engagement with the tube. A second electrode is provided to contact a surface of the tube which is about to register the fin at the point of mutual engagement.

An ultra-high frequency current is applied to the electrodes with a current path being provided betweenthe electrodes via the base portion and the tube, thereby causing the base portion and the tube to melt. A force is then applied to the tips of the fins at the point of mutual engagement to forge the molten root portion to the fin to the molten surface of the tube to create a fused bond therebetween.

Lateral support means are also provided to guide and laterally support the fin as the forging force is applied.

The features of the present invention which are believed to be novel are set forth with particularity in the appended claims. The present invention, both as to its organization and manner of operation, together with further objects and advantages thereof, may best be understood by reference to the following description, taken in connection with the accompanying drawings.