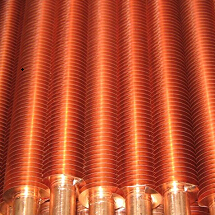 L-Type Tension Wound Finned Tubes also called Wrap-On Finned Tubes, which used in applications where temperatures lower than 300℃. In other words L fin tubes mainly used in low-temperature application where some degree of tube wall protection is needed. L-Foot tension wound fin tubes consist of two parts, aluminum fin and base tube. The thin aluminum fin strips tightly wound helical around the base tube circumference. A foot is first formed at one side of the fin strip (Called the name L foot). The strip is then wound tightly around the tube, with the foot bearing on the tubes outer surface. These short horizontal limb of each L are in full contact with the base-tube surface to cover it completely. While Tension in the fin strip as it is wrapped around the tubes serves as seat the fin foot forcefully on the tube, and then to hold the fin firmly in place. L-footed finned tubing offer maximum heat transfer at lower temperatures circumference. The unique L-shaped design holds fins rigidly to withstand heat cycling and high velocity air vibration. These fins offer a certain degree of atmospheric protection of the tube wall anti corrosion. The broad contact surface between the tube and the fining enhances heat transfer. This fin design is highly efficient and cost effective.

The ends of the fins have to be stapled to prohibit the aluminum fin from unravelling or loosing the contact between the fin foot and the base tube. This contact is critical to the operation of the air coolers, since the heat is transferred from the tube wall, through the fin, to the surrounding hot air.
L Finned tubes Advantages:
Suitable for using in low-temperature application
This kind of fining type is the most cost effective way compared to the others.
The failed fins could easily removed during production and bare tubes can be used again for fining.
There is no need to make a helical grove over the core tube.
It is possible to place the fins on a super thin-walled tube with is particularly desirable when using expensive alloys as core tubes.
The tubes can withstand a temperature of up to 130°C without the risk of atmospheric corrosion or thermal stress.
L Finned Tubes Weakness:
The fins are not so strong to resist mechanical damage when external forces applied on fin area
Handling shall be careful done with care to avoid any damage.
Finned tubes may be damaged when using either steam or high-pressure water for cleaning
As the fins are helical wrapped in grooves, un-finned area is not covered which can be exposed to corrosive media and galvanic corrosion at the base of the fins can be accrued
Tubes shall be very straight with smooth out side area to make good finned tubes
Fins should be fixed at both ends in order to avoid un-wrapping
L Finned Tubes Application:
Oil and gas refineries
Petroleum, chemical and petrochemical industries
Natural gas treatment
Steel making industry
Power plants
Air conditioning
Compressor coolers

In order to forward you a promt offer we would be pleased to receive you detailed enquiry including:
• Base tube material
• Base tube size (OD x WT x Length)
• Fin material
• Fin type
• Fin diameter or height
• Fin thickness
• Fins per inch, meter or fin pitch
• Lenght of plain, unfinned ends
• Finned Tube Quantity
(Additional fabrication, such as bend or weld the tubes into tubeplate or assembly)